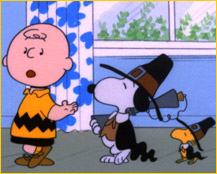 I met with a client at Overlake Hospital Medical Center in Bellevue this afternoon. I parked in the north parking garage and used the underground access tunnel to get into the main hospital. The tunnel is filled with shops and feels a whole lot like you are walking through a mall. Overlake is a beautiful hospital and exactly what I expected.

The drive home was an adventure. It took over 90 minutes and I crawled most of the way (see previous posts). My ankle was sore when I got home from 90 minutes of braking action.

I liked the new special, although I felt like some of the characters were not portrayed in their true light. The beauty of Charlie Brown is that he screws up yet everyone learns a valuable lesson. In the new special he doesn't screw up and Lucy has a great deal of difficulty believing it.

Every year I try to catch the Halloween and Christmas Peanut's specials. It's been years since I have seen the Thanksgiving special and a whole hours of Peanuts got my brain going, here are some random thoughts and observations.

As a kid I always thought that I was *just like Lucy* and as an adult I am totally disagree. She is the oldest girl with two younger brothers but she is a bit more bossy than me (although my brothers would most likely disagree.) The official Peanuts website describes her as follows and after reading it I can only hope that I am nothing like Lucy.

Lucy Van Pelt works hard at being bossy, crabby and selfish. She is loud and yells a lot. Her smiles and motives are rarely pure. She's a know-it-all who dispenses advice whether you want it or not--and for Charlie Brown, there's a charge. She's a fussbudget, in the true sense of the word. She's a real grouch, with only one or two soft spots, and both of them may be Schroeder, who prefers Beethoven. As she sees it, hers is the only way. The absence of logic in her arguments holds a kind of shining lunacy. When it comes to compliments, Lucy only likes receiving them. If she's paying one--or even smiling--she's probably up to something devious.

Why does Marcie refer to Peppermint Patty as "Sir?"

In the Thanksgiving special when Marcie is making peace between Charlie and Patty he uses their proper names, Charles and Priscilla. Yet when Patty is referred to by her proper name in the new special they call her Patricia. What is the deal there?

Lucy didn't go to camp in the special because she much more important things to do that go to camp. Lucy loves to be the center of EVERYTHING, it just wasn't camp without her.

Would Peanuts be the same without the music?

Hope you are having a good evening!
Posted by Julie Anne at 9:28 PM