My kind of drinkin 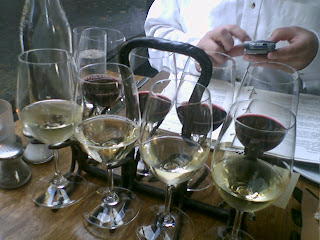 Wine tasting with dinner before the symphony.
Posted by Julie Anne at 5:17 PM No comments:

Quote of the day

I love to make soup. And I am often told that my soup is very good. I saw this quote and fell in love with it. A possible explanation for why I love making soup? You decide.

"Only the pure of heart can make good soup."
-Beethoven

Posted by Julie Anne at 3:39 PM No comments: 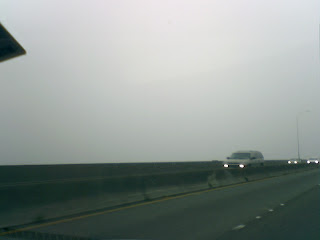 Crossing Lake Washington in the fog.
Posted by Julie Anne at 8:41 AM No comments:

It's time for another quiz! This is a copy of a quiz that was passed out at the beginning of a meeting at the office this week. I had seen a few of the questions before but was challenged by a few of them. I only missed two, how will you do?

Human Nature as a Fable

A colleague and I were on a conference call yesterday and the conversation migrated to human nature and why we do the things that we do even though we know that we will likely get the same outcome as we have received in the past. She reminded me of the tale of the scorpion the and frog which I hadn't thought of for years, the full text is below.

The Scorpion and the Frog
One day, a scorpion looked around at the mountain where he lived and decided that he wanted a change. So he set out on a journey through the forests and hills. He climbed over rocks and under vines and kept going until he reached a river.

The river was wide and swift, and the scorpion stopped to reconsider the situation. He couldn't see any way across. So he ran upriver and then checked downriver, all the while thinking that he might have to turn back.

Suddenly, he saw a frog sitting in the rushes by the bank of the stream on the other side of the river. He decided to ask the frog for help getting across the stream.

"Hellooo Mr. Frog!" called the scorpion across the water, "Would you be so kind as to give me a ride on your back across the river?"

"Well now, Mr. Scorpion! How do I know that if I try to help you, you wont try to kill me?"

"Because," the scorpion replied, "If I try to kill you, then I would die too, for you see I cannot swim!"

Now this seemed to make sense to the frog. But he asked. "What about when I get close to the bank? You could still try to kill me and get back to the shore!"

"But then I wouldn't be able to get to the other side of the river!"

"Alright then...how do I know you wont just wait till we get to the other side and THEN kill me?" said the frog.

"Ahh...," crooned the scorpion, "Because you see, once you've taken me to the other side of this river, I will be so grateful for your help, that it would hardly be fair to reward you with death, now would it?!"

So the frog agreed to take the scorpion across the river. He swam over to the bank and settled himself near the mud to pick up his passenger. The scorpion crawled onto the frog's back, his sharp claws prickling into the frog's soft hide, and the frog slid into the river. The muddy water swirled around them, but the frog stayed near the surface so the scorpion would not drown. He kicked strongly through the first half of the stream, his flippers paddling wildly against the current.

Halfway across the river, the frog suddenly felt a sharp sting in his back and, out of the corner of his eye, saw the scorpion remove his stinger from the frog's back. A deadening numbness began to creep into his limbs.

"You fool!" croaked the frog, "Now we shall both die! Why on earth did you do that?"

The scorpion shrugged, and did a little jig on the drownings frog's back.

"I could not help myself. It is my nature."

Then they both sank into the muddy waters of the swiftly flowing river.

Now the question I am left pondering, how do you get someone to realize that their "nature" is harmful to the company, to themselves and to others? If I could answer that question then I wouldn't have a problem, now would I.
Posted by Julie Anne at 8:02 AM No comments: 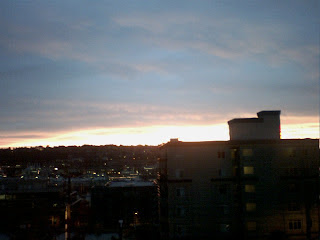 Posted by Julie Anne at 6:55 AM No comments:

Quote of the day

"Invent your world.
Surround yourself with people,
color,
sounds,
and work that nourish you."