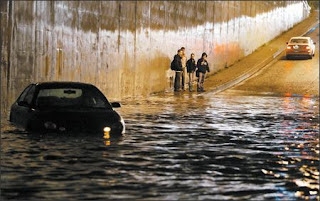 My first 9 months in Seattle the weather was fairly mild/normal but since December of last year we have had several instances of extreme weather and have broken numerous records. And for the record, I am tired of record breaking weather.

First it was January. It rained nearly everyday and we were well on our way to breaking the *most consecutive days of rain* record but missed it when it failed to rain on day 29 and we needed 32 consecutive days for the record.

Then came July when we broke the record for the *warmest low temperature* day on July 22, 2006. The end of July was just miserable in general is was hot and muggy and all you could do was lay around and sweat.

Then came November. The beginning of the month was full of record rainfall and at the end we had snow, ice, lightening and thunder. It was crazy and when it was all over we had recorded the wettest month in 115 years (since they started keeping track) with a total of 15.63 inches.

I was really hoping for a *normal* December, but this week has been another week of extremes. We have had three storms all of which have have brought rain and wind. The worst was the storm that began mid-day yesterday. It started by dumping 2.17 inches of rain (setting a new record, the old was 1.24) and causing urban flooding and ended with a new record wind gust of 69 mph.

As a result of the storm 3 people are dead, so far. Two died when trees hit their cars and one woman actually drowned in her own basement.

Getting home last night was incredibly challenging. I-5 was flooded with excessive rain fall and was closed for a short time and then later one lane was opened. As a result of the game traffic and people choosing alternate routes Hwy 99 was a parking lot. In previous cases when I-5 and 99 are not an option I will go around the west side of Queen Anne hill but that wasn't an option has night due to a mudslide. Just prior to my arrival at home they announced that Mercer St. was closed because of 4 ft of water. I couldn't believe it and thought they were surely exaggerating on the radio until I saw it myself (pictured above, courtesy of the Seattle PI). This flooding is a mere 4 blocks from my house. I was super patient and finally after nearly 2 hours of traffic and trying different routes, I made it home. The lights flickered and everything rattled all evening long and in the end I was very lucky; I never lost power.

With daylight came the end of the storm and the race to clean-up. Over 1 million people in western Washington are without power and everyone has just begun to assess the damage. Many business and most schools are closed today. I sincerely hope that we can finish the year without setting any new records in the weather department.
Posted by Julie Anne at 11:03 AM