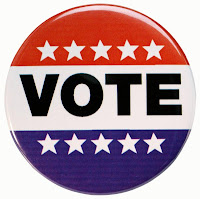 I love to vote! I have always voted at my assigned polling location, never by absentee ballot. There is something I love about voting in person. I love signing my name, getting my ballot and closing the curtain behind me as I punch holes or fill in dots on my ballot. The whole process makes me feel very American, very proud. Plus I love getting my "I VOTED" sticker and wearing it for the rest of the day to remind others to vote.

I know many who hate voting in-person whether it be the long lines or the craziness of the whole experience and opt for an absentee ballot. My parents have already voted as Utah offers the option to "vote early" in numerous locations. I don't so much care how people cast their votes, just that they vote.

Voting has never been an "optional" thing in my world. My parents instilled the importance of voting when I was young. I remember them engaging my brothers and me in conversations about the candidates and issues when we were children seated around the dinner table. I remember watching as they sifted through the Voter Guide and made their decisions of ballot measures and candidates. And, I remember being envious of the process and wishing I were 18 and could participate for myself.

It is hard for me to understand why people don't exercise their right to vote and take the responsibility seriously. According to the United States Census Bureau in the last presidential election (November 2004) only 64% percent of voting-age citizens cast a ballot, and that was the highest turnout since 1992. In the previous presidential election (November 2000) only 60% of voting-age citizens turned out. Those that don't vote often have their excuses and reasons but if I were to get a few minutes with someone that I knew wasn't going to vote tomorrow I would share the following.

Not only are we electing a President tomorrow but we are electing 11 Governors, 35 Senators, and Representatives for every seat (435) in the House. States will be voting on ballot measures that include issues like abortion, anti-affirmative action, immigration, same-sex marriage, renewable energy, transportation, drug policy, elections and campaign finance, to name a few. The men and women who will represent us and shape the future of our country will be elected (or not) tomorrow. When you think that one vote can't make a difference, consider the following:
One vote can and has made a difference! Please take the time out of your day and exercise your right to vote tomorrow.
Posted by Julie Anne at 4:00 PM