Are you wearing a daffodil today? 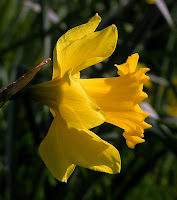 I just switched the calendar at my desk from February to March and noted that today is St. David's Day. I had never heard of St. David's Day but a quick Wikipedia search revealed that St. David's Day is a feast day to celebrate the patron saint of Wales and held on the 1st of March every year. So I continued reading and discovered these other interesting things about St. David's Day.